Location of the Symposium

The International Symposium «Ecology of Aphidophaga» 15 will take place in the Centre de Cultures i Cooperació Transfronterera of the Cappont Campus of the University of Lleida, located on the South shore of the Segre River.

The venue is located from a walkable distance from historic city center and Lleida main touristic attractions. Cappont campus is also served by city busses.

Lleida is the capital city of the Segrià region and of the province that takes its name. It is the most important population and economic inland centre in Catalonia. Its economy is based on the agri-food sector, as well as on all kinds of services.

Lleida is a friendly town in Catalonia, the north-east of Spain, located between Barcelona and Zaragoza. It is easy to find your way round Lleida since the population is around 140,000 inhabitants and its center and surroundings can be reached on foot. Agriculture is found just when leaving the town at only 5 minutes driving.

Lleida has the privilege of having important natural areas such as:

This natural legacy has made Lleida grow, considering environmental and quality values within the framework of a sustainable city.

By plane
By train
By bus
By car

Both major international airports, Barcelona-El Prat and Madrid-Barajas, are located in cities with a good connection with Lleida-Pirineus station by High Speed Train (AVE) and other fast trains (AVANT, Alvia or AVLO). It takes about one hour from Barcelona-Sants Station and a little more than two hours from Madrid-Puerta de Atocha Station.

Take the R2 Nord line (Airport – Sant Celoni/Maçanet Massanes train from the airport railway station situated at Terminal 2 to go directly to Barcelona-Sants station. There are trains every 30 minutes (from 6:08 to 23:38). The R2 line, which connects Terminal T2 with Sant Celoni / Maçanet Massanes, stops at: Airport – El Prat de Llobregat – Bellvitge – Barcelona-Sants Station. The trip takes 19 minutes. As the train station Aeroport is located outside Terminal T2, a free shuttle bus is in function 24 hours a day to transfer from Terminal T1 to T2. You can also take the Aerobus to Plaça d’Espanya, and then L3 metro in direction of Zona Universitaria and get off at Estació Sants.

Once at Barcelona-Sants station, take a High Speed Train to Lleida-Pirineus station (see “by train” section for more details).

The airport is connected to Madrid-Puerta de Atocha station by metro with some line transfers as shown below:

High speed train is the fastest way to reach Lleida from Barcelona and Madrid. A discount of 10 % is available for Aphidophaga conference attendees who choose to travel to Lleida by train (please ask for the voucher before to purchase your ticket by sending an email to fundacio@udl.cat). Travel time is about 1 h from Barcelona and 2 h 15 min from Madrid. Make sure to verify the time table before to buy your ticket (slower trains are also scheduled!). Schedules can be consulted online and online purchase can be done on Renfe website. Instructions for online purchase with the voucher can be found here.

There is a direct bus connection from Barcelona-El Prat airport to Lleida with ALSA. The same bus can be catch up at Barcelona-Estació del Norte. However, it is important to notice that the journey from the airport is about 3 h because the bus stops really often on the way to Lleida. Schedule can be consulted online and online purchase can be done on ALSA website. 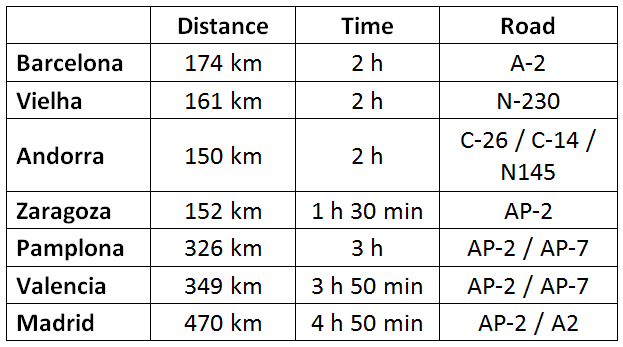 You can find here a complete list of hotels and others establishments in Lleida.

The closest ones from the venue are:

The climate in Lleida is continental, with Mediterranean influences. September is a perfect month to visit the capital of Lleida province, the temperature has an average low of 14 ºC while during the day the average high is 27 ºC. The average rainfall in September is 33 mm.

Lleida time zone is CET (Central Europe Time) that is UCT/GMT +1 hour. In summer, Lleida uses ‘daylight savings’, with clocks put forward one hour to UCT/GMT +2 hours. This will apply at the time of the conference.

The electric current used throughout Spain is the European standard 220 – 240 V, A.C. 50 Hz. The sockets are two-pin, and adapters may be bought at most electrical and lamp stores.

Complimentary Wi-Fi will be available throughout the venue. Password will be given at the registration desk.

Normally, for EU travelers, there is no extra charge for roaming; you should pay the same price as when you are in your home country (please verify with your cell phone carrier to make sure it is your case).

For travelers from others countries, your cellular phone should work in Spain, but it is strongly recommended to consult your cell phone carrier about extra charges they may apply if you don’t turn off your data before arriving in Europe. Free Wi-Fi accesses are really common in shop, restaurants and hotels, and a complimentary Wi-Fi access will be available throughout the venue.

The currency in Spain is the Euro (€). Coins come in denominations of 1 and 2 euros (€) and 1, 2, 5, 10, 20 and 50 euro cents. Notes come in denominations of 5, 10, 20, 50, 100, 200 and 500 euros (€). It is important to be aware of the way numbers are written in Spain: decimals come after a comma (e.g. 60,35 € = 60 € and 35 cents) and thousands come before a point (e.g. 1.360,35€ = one thousand three hundred and sixty euros and thirty-five cents). Traveler cheques and 500 euros notes are very rarely accepted, but there are no problems with credit cards in shops, restaurants, gas or petrol stations and hotels. Sales tax in Spain is the VAT (IVA in Spanish) and in most places VAT is included in the item prices. The general VAT in Spain is 21 % but there are reduced rates. The 10 % shown on the bill is the IVA that you pay for restaurants, hotels, transport and general food items. There is also a 4 % rate for basic food products. Gratuities are not expected but you certainly won’t be insulting anybody by leaving a tip.

What language is spoken in Lleida

Catalan is the proper language of Catalonia but both Catalan and Spanish are official languages. In Lleida, English and French are usually understood in touristic establishments and by many people.

To protect people from the health effects of second-hand smoke, smoking in all hospitality and public venues, including bars, restaurants and cafes is prohibited in Lleida. If you smoke, please remember to smoke outside.

Water is safe to drink straight from the tap in Lleida.

One of the most frequently used services by visitors is banking. Lleida offers a wide range of banks and savings banks. Their usual opening hours are from 8:30 to 14:00. Savings banks are also open on Thursday afternoons from 17:00 to 19:00. On weekend and public holidays, they are closed.

Getting around in Lleida

The Centre de Cultures i Cooperació Transfronterera (CCCT) is about 12 minutes walking from the city centre (City Hall or Paeria). Although distances in Lleida are short and most of the city can be reached on foot, the CCCT is also directly accessible by bus and taxi.

Lleida has eleven bus lines providing communications between the different parts of the city. The bus ticket costs 1.20 € and it can be bought on board. Bus fares have to be paid to the bus driver upon entering the bus. The main routes travelling to/from Cappont Campus are served by bus number 2, 3, 5 and 6 (Pont Universitat stop).

Taxis are readily available in Lleida 24 hours a day. You can take a taxi whenever necessary by going to specific taxi rank or calling a taxi company (taxis are not circulating while waiting for customers in Lleida). These are the telephone numbers of the companies providing service in Lleida:

Please make sure you fill out the post evaluation survey that will be sent to you by email. We would appreciate your thoughts and comments to improve future Aphidophaga Symposia.